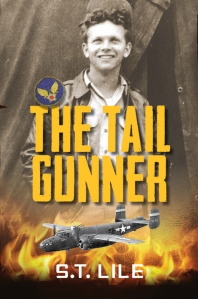 Get it while it’s hot! Now available on Amazon or through your local bookstore.

Back in 2004 when I lived in Los Angeles, I began the first draft of this amazing novel. I didn’t know if it would be fiction or non-fiction, but I knew it was a story waiting to be drawn from the dusty pile of pictures and papers my dad had left behind. If Dad was still here, the story would be much different, but since I had only the clues he left behind, the project took on a life of its own, twisting and torquing like paper on fire. Yes, it’s based loosely on his story. Yes, it’s based on solid historical research into what life was like in the Army Air Corps in Europe between 1943-45. But it is also a young girl’s journey toward adulthood with all its awkward twists and turns. The stories of Sylvie and Bish intertwine in letters, diary entries, and angsty teen-penned poems. As a result, the book is a cross-genre experiment that took seven years to take shape.

During those seven years, I lost my mom and my fiancee, two of the most wonderful people I had the good luck to know. As I stand here by myself, book in hand, I think of all the times they encouraged me, pushed me to keep writing and rewriting, to keep believing that what I was up to was worth the time.

Now, thanks to the support of so many, it’s here—the best Christmas present I could imagine. I think back to the words of the real gunner as he was kicking me in the butt to finish college, “It doesn’t matter how long it takes, it just matters that you get it done.” Well, Dad, this book be done.

But there are still more stories to be told.

Wishing you all the happiest of holidays,