The story behind THE TAIL GUNNER novel, based on the WWII experiences and collection of Keith B. Lile

March 9, 2014 — One of the mouse-chewed letters in Dad’s collection was from my Uncle Wendell written while Wendell was living in Puyallup, Washington going to high school. In a letter dated August 8, 1944, he writes,

“It’s been about 15 months since I have seen you. You must be a lot different. Do you have any idea as to what side of the ocean you shall be sent? I should think the Pacific side is the most probable, because the war in Europe can not last much longer. The Germans can’t last much longer. The Russians are certainly cleaning up on them. The Americans are also starting to roll. What is your view point?”

Somewhere along the way, this letter found Dad and he kept it with him through the war and far beyond. If you’ve been following this blog, you know that he was sent across the Atlantic to North Africa. There, awaiting assignment, he probably read and re-read this letter many times.

“Do you know definitely what type of plane you shall be assigned? You are still a tail gunner, I suppose….Some time ago you wrote and said that you would soon be flying for two-hundred hours or more. Did you mean piloting or just the same as usual?” 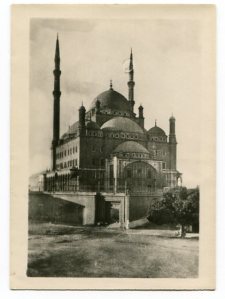 I don’t know how Dad answered, but I’m pretty sure he shook his head at the questions of his over-eager and naïve little brother. The reality of the conflict had landed him in another world, one where the money came from the “Banque D’Etat Du Maroc” and people rode camels and wrote in Arabic. War torn buildings were not uncommon and the heavy tents smelled of nervous sweat. 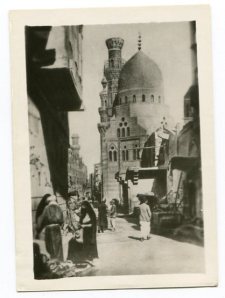 Street scene in Egypt. From the KBL Family Collection.

There are pictures in Dad’s collection from Cairo and Jerusalem, but there is no written documentation of his having visited there. Perhaps he and his buddies did so while waiting for transport to Corsica, perhaps they simply bought the tourist photo packs. Either way, it was a far cry from Puyallup with its berry fields and hop farms.

An engraving from about 1890 of the same street seen above in 1944. “Bab Al-Wizir Street was a main thoroughfare between the citadel and a city gate (Bab Zuweila) made fashionable during the 19th century when Sultan Muhammad Aly was in residence.” From the Washington State Historical Society Collections.

In 1944, the 12th Army Air Force had helped secure both North Africa, then Corsica and southern Italy. They were on the move northward and needed flight crews to keep up the push. Dad was one of those men. The strategic bombing plan was to crush the railways and supply routes from northern Italy into Austria and Germany. Dad was assigned to the 445th squadron of the 321st bomb group and the 57th bomb wing, and as they ferried men from North Africa to Corsica, Dad took up residence in the camp near Solenzara on the east coast of Corsica. On December 10, 1944, he flew his first mission. Fifty-eight more would follow.

2 thoughts on “Mission 31: On the Other Side of the World”